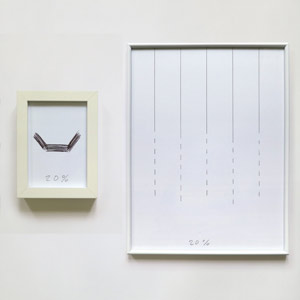 At first sight, the work of Claude Closky is mainly immaterial. Language is his model to articulate images, text, numbers, and sounds collected in our environment, or made in his studio. Although reluctant to produce objects and spectacular effects, Closky’s work still addresses issues about visibility and space appropriation. Claude Closky’s projects always find alternative ways to emancipate themselves from the formats imposed by the sites where they are exhibited. He seeks to point out the contradictions of our contemporary society and its representations, but also to question the role of art as producer of a cultural consensus and set of values. His works confront and question our environment, the conditions and benefits of artistic production, its relation to an audience.