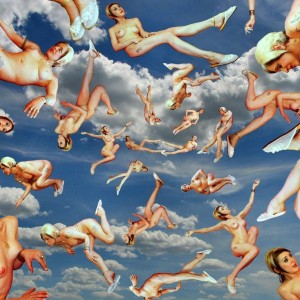 This is the first British exhibition by influential avant-garde artists Genesis and Lady Jaye Breyer P-Orridge since 2003, featuring the European premiere of major works from their Pandrogyne project. Featuring explicit images of the artists’ bodies, religious iconography and the British Royal Family, the works are often uncomfortable; challenging the status quo through their visceral, occasionally shocking nature. The artists promote an alternative lifestyle to the prescribed nuclear family, directly attacking conservative society’s smug self-belief in the ‘Big Society’ and its relationship to democracy in a Rennaissance inspired alchemical search for Divine perfection and evolutionary proposals for a Human(e) Species. Ultimately the work is traditional at its core, with the body as a central image and seeking transcendant visionary change towards a non-violent future for humankind.